Major Hoess was a German Major who served for the I SS Panzer Corps, during World War Two. He served as a minor antagonist in the film, Saving Private Ryan, leading the company who attacked the town of Ramelle.

Major Hoess (Markus Napier) commanded a German unit that launched an attack on June 13th, 1944 that was intended to capture the French bridge at the town of Ramelle from a mixed unit of American Rangers and paratroopers.

Although the Germans were successful in driving the Allied troops across the bridge that spanned the Merderet River, Hoess' Tiger Tank was destroyed by a P-51 Mustang that was part of an advancing force of American troops that turned the tide of the battle. 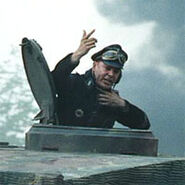 Add a photo to this gallery
Retrieved from "https://savingprivateryan.fandom.com/wiki/Hoess?oldid=9294"
Community content is available under CC-BY-SA unless otherwise noted.