Private First Class James Francis Ryan is an American soldier who served for the 101st Airborne Division in Baker Company, 1st Battalion 506th PIR during World War Two. He was the youngest sibling of the Ryan family. His older brothers were Daniel Ryan, Peter Ryan and Sean Ryan and his mother was Margaret Ryan. He has a wife known as Mrs. Ryan. He serves as the pivotal character of the film, Saving Private Ryan.

Background and being found by Miller

He served in the 101st Airborne Division he was assigned to go under the command of Captain Jennings. Captain Jennings was later ordered to defend Ramelle from an expected German attack led by Major Hoess.

Surviving the bombings, he went out with Corporal Henderson and PFC Toyne to destroy a half track the group were expecting. He destroyed the half track and hid as the trio watched a group of rangers kill the Germans inside. After introducing himself, the group went back with him to Ramelle where they revealed the deaths of his brothers and the army's request he be sent home. He stubbornly refused, expressing a desire to stay with his unit. Despite Private Richard Reiben revealing that they lost two men finding him, he still refused. He requested for Captain Miller to pass a message to his mother stating that he is alive and with the only "brothers" he has left, his fellow soldiers. He then mourned his brothers' deaths with his friends.

Persuaded by Sergeant Horvath, Miller stayed to help Ryan and the other troopers. Ryan assisted in making sticky bombs out of his socks and helped to set up explosive traps.

Once prepared, he told Miller of a story back home of how his brother, Daniel Ryan, was going to have sex with his girlfriend Alice Jardine only for James, Peter and Sean to intervene, resulting in Daniel attacking Sean and a kerosene lateen exploding and setting the barn ablaze. James , once he'd calmed down from laughing, asked Miller to tell him a story; particularly the one about Miller's wife and trimming the rose bushes. Miller replied solemnly "No. I save that one just for me."

The pair soon heard rumbling in the distance and quickly readied themselves with the others for battle.

In the Battle, James was the primary objective to keep safe by Miller. This meant that almost all the time Miller was no more than 2 feet away from him. He was not left alone apart from one occasion which almost resulted in his death. He was always under the supervision of Captain Miller. It explains why Miller told James to stay in his position and not help the defenders disabling the Tiger tank.

Shortly after, the Tiger notices Private Ryan and decides to take aim at him, but Rieben noticed and hurried to pull Ryan out of it's shell's line of fire. Miller, whom forgets everything, hurrys up to Ryan to find him struggling to get released from under Rieben. He then sees the 20mm flak shell tear off his friends.

He and Miller soon become trapped in a shell hole and ran out of ammunition so they begin to use 60 mortar rounds to take out the Germans by fusing the arming wire with a metal plate since they had no mortar to fire them with. They take out several Germans by doing so but are powerless when a tank directly invades their position, forcing them to fall back to the bridge.

They soon make it across the bridge and use some scavenged ammunition to try and draw the Germans fire. It was futile, however, leaving them no choice but to blow the bridge. Ryan cowered behind a wall rocking and crying from a mental breakdown because of what was happening around them. However, Miller refused to give in, stumbling out in the open to retrieve the detonator only to be shot in the chest by a german soldier.

Once reinforcements arrived and drove the Germans back, Ryan sat beside Miller as the Captain died from his bullet wound. In his dying breath. Miller told Ryan to earn the sacrifices of the soldiers, passing away soon after. Ryan was then sent back home to his mother.

After the war, Ryan lived a typical family life, meeting and marrying his wife and they had several children together. 54 years later, he and his family travelled to Normandy to visit the graves of the fallen soldiers. While entering the area, he marched ahead of his family, falling to his knees and broke down crying. His family surrounded and comforted him. Sometime later, Ryan stood beside Millers grave and talked to him briefly. He then asked his wife if he was a good man and lived a good life; which she confirmed; allowing him to feel he made their sacrifice worthwhile. He then saluted Miller's grave, as an Americam flag blew in the background.

Ryan with Captain Miller in his dying moment. 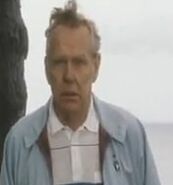 Ryan as an old man.

Ryan surrounded by his family.

Ryan walking through the cemetery of deceased soldiers.

Ryan staring at the cemetery.

Ryan looking at Miller's grave.
Add a photo to this gallery
Retrieved from "https://savingprivateryan.fandom.com/wiki/James_Francis_Ryan?oldid=9044"
Community content is available under CC-BY-SA unless otherwise noted.