Technical Sergeant Michael "Mike" Horvath was an American soldier serving in the 2nd Rangers Battalion of the United States Army during World War Two who held the rank of Technical Sergeant. He was a close friend of Captain John H. Miller, serving alongside him in both Africa and Italy before the invasion of France. He was portrayed by actor Tom Sizemore. He served as the deuteragonist of the film Saving Private Ryan.

Horvath appeared to be the closest thing Miller may have had to a friend, joking in battle when Miller draws fire that Mrs Miller, his mother, would be very cross if she saw him do that. Miller dryly retorted that he thought Horvath was his mother and someone who Miller would refer to by first name and always ask for opinions on matters at hand.

Not much is known about Horvath before the war except that he was either married or engaged to an unknown women given by the ring is he shown to wear during the invasion of Omaha beach.

Horvath was a capable sergeant and seeming veteran of the war. During the Omaha landing, he was shouting at the men to spread out to better withstand German machine gun fire. He led a platoon of men to the beach line and arrange a plan of attack with Miller. He then provided covering fire against a Nazi machine gunner. He also threw a grenade into a bunker to kill the cowering Germans and allow Private Doyle to burn them with his flamethrower.

After the long battle, he gathered dirt and placed it in a ration tin labelled "France" in a satchel with two other tins labelled "Italy" and "Africa" once the landing was secured. He remarked about the view of the beach with Miller, which was now riddled with fallen soldiers and blood.

The Search For Ryan

Horvath was one of the men chosen by Miller to go search for Private James Francis Ryan and serves as the squad's second-in-command. At Neuville, he looks after Corporal Upham, who has never seen combat, as they secure the village from German soldiers.

Horvath and Miller later spoke seriously in a church in Neuville, reminiscing about a past comrade, Vecchio, an unusually short Ranger who would urinate on other soldiers' jackets as a prank ("V" for "Vecchio" and "Victory). Miller admitted to Horvath that he is able to rationalise the life or death decisions he must make as commanding officer, by believing that each order, even if it gets soldiers killed, saves the lives of two, three, or ten others. Horvath states that this time though the mission will only save one man, Private Ryan, so it's not the same principle.

After they leave the village, they encounter a German bunker. He volunteers to go left when assaulting the bunker only to be mocked by Miller for not being a fast enough runner. He then volunteers to go up the middle, but is told to shut up by Miller in frustration for Horvath not volunteering sooner. He and the squad assault the bunker and succeed but Wade is wounded. Miller eventually orders him to give Wade morphine so he does painlessly when they can't save him.

Tensions soon rise between Reiben and Horvath when Steamboat Willie, the soldier who killed Wade, is let go, and Rieben declares his intent to desert the failing mission. Desertion is a capital offence and Horvath appears ready to shoot Rieben. However, Miller diffuses the situation when he reveals his origins before joining the army.

During the battle at Ramelle, Horvath was not seen a lot though he was seen using a bazooka to destroy a Tiger Tank. He comes face to face with an opposing soldier to which both of their rifles jam. The soldier threw his helmet at him to which he quickly retaliates in the same manner. Despite being the first to draw his sidearm, he still takes a shot in the leg as the opposing soldier falls.

He then limps back to the Alamo where he and Reiben try in vain to use bazooka to destroy Major Hoess' Tiger Tank, both of the shots seemed to ricochet. So they run back to the Alamo still carrying the bazooka. He is shot again through the back as he flees, and then in the chest.

Mike dies after he slumps behind cover, claiming to his comrades that he only got the wind knocked out of him and that he would be fine.

Horvath appears to be the only soldier who believes in the mission after Ryan states his intent to stay and defend the Ramelle bridge. He says that despite Ryan having done nothing to deserve a ride home, "perhaps saving Private Ryan might be the only good thing we pulled out of this whole, God-awful, shitty mess" and it would earn them the right to go home and leave the army and the war. Miller appears undecided until Horvath says this, so it seems Miller does put great stock in the Sergeant's counsel.

He is also a capable leader as shown during the beach landing by how he led his platoon up the beach calm and in control. He also defends the rights of others such as Miller's need for respect as an officer and how he will even shoot someone who disrespects him, though it was prompted out of anger. However, this displays that he is not as skilled as Miller as he has to resort to violence and threats to take command while Miller maintains a level head and sorts matters out rationally. 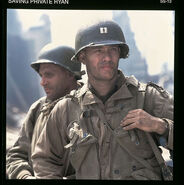 Horvath fleeing from the advancing Germans with Reiben.

Horavath administers a lethal dose of morphine at Miller's insistence.

A close up of Horvath's face

Horvath encounters a German soldier in Ramelle, and both their guns jam.

Horvath brings Upham to the Alamo.

Horvath about to destroy Tiger tank.

Community content is available under CC-BY-SA unless otherwise noted.
Advertisement