Omaha Beach is the codename for an area of the Normandy Beach for Operation Overlord landing that took place on June the 6th, 1944; known as D-day or Day of Days. It took place during the later stages of World War Two. It acted as a major turning point that was key in regaining control of France and eventually winning the war.

Omaha Beach, along with Utah Beach, Sword Beach, Gold Beach, and Juno Beach was one of the landing sites for Operation Overlord. It began the Normandy Campaign. The U.S. 1st and 29th Infantry Divisions, Army Rangers, and Navy Beach Battalions landed on this site, on D-Day or day of days. Here, The Allied Supreme Command predicted this would be the hardest beach to capture, due to the amount of obstacles, and German positions. It was the beach where the most Americans landed on.

The beach was eventually captured, and stayed under command of the Allies for the rest of the Campaign. After the war, the name Omaha stuck, and it is still known by that name today.

In the movie, The US Army Rangers, Navy Beach Battalions, and 29th Infantry were on the Dog Green sector. It first starts out with Captain John H. Miller, commander of Charlie Company, 2nd Ranger Battalion, landing in an LCM on the beach.

He gives instructions to the men, telling them to "Keep the sand out of those weapons! Keep those actions clear! I'll see you on the beach!" All the men crouch down, ducking as they hear the boom of nearby mortar shells. Right when the ramp goes down, a machine gun immediatley opens up on them, and several soldiers are instantly killed before the ramp goes down.

Miller grabs one Soldier named Delancey, who was shot in the leg, and jumps over the side with him. They head up the beach, and find refuge behind one obstacle. Delancey turns to thank Miller, when he suddenly takes a bullet in the chest, killing him. Miller continues to trudge up the beach. As he rests on the sand, he fatiguely watches the brutal scene in front of him. He sees several men take cover behind obstacles, while others are fried by an exploding flamethrower tank. He notices one man grab his severed arm and run off with it, and spots a burning LCVP with men covered in flame.

Miller eventually comes to his senses, and orders Sergeant Mike Horvath to move his men up the beach, while Miller takes some Rangers and 29th Infantry Soldiers up the beach. Nearby, Soldiers are still struggling under the heavy fire. One young soldier is lying on his back, with his intestines spilling out. He suddenly starts yelling for his mother.

Miller runs into a group of medics from the 104th Medical Battalion, carrying typewriters and tells one medic to "Get rid of that crap", and to get some weapons and follow him. He then runs into Lt. Briggs, who had been wounded in the abdomen. Miller tries to tell a 7th Navy Beach Battalion Soldier that it's futile to stay and blow up the obstacles, since all the tanks are foundering in the channel. But the soldier insists on continuing with his job, so Miller walks up the beach, dragging Briggs up with him.

Suddenly, a mortar lands nearby. Miller is knocked down, but gets up and grabs Briggs, when he notices that the unfortunate officer's lower body had been blown off. Disturbed, Miller charges to the Sea Wall, and finds some cover near a small hill below some shingle, and meets Horvath and his other Soldiers at the emplacement.

He tells a nearby radioman that no tanks are up the beach. Horvath then tells Miller that no one besides them are where they are supposed to be. Miller relays this to the Radioman, saying "First wave, ineffective, we do not hold the beach say again, we do not hold the beach". Another soldier informs Miller that no beachmaster is present, and all the units are mixed up. Miller tries telling the radioman this, when he notices that the radioman's face had been blown off, with his equipment destroyed.

Private Reiben, Private Mellish, and Private Caparzo join Miller at the hill, and inform him that the battalion surgeon named Deforest had been hit, and was being treated by Medic Wade. Wade is able to stop the Surgeon's bleeding, when Deforest takes a shot to the head, killing him. Furiously, Wade yells at the Germans, "Just give us a fucking chance you son of a bitch, you son of a fucking cocksucker!" Mellish grabs Wade, and brings him to the small hill.

Miller tells his soldiers to grab some weapons, who all go off and take them from wounded or dead soldiers. Private Jackson joins the group at that time, and Miller then orders for some Bangalore torpedos. As they set them up, one soldier takes a shot to the head. However, the bullet bounced off the helmet, leaving the stunned soldier alive. He takes off his helmet, and rubs his head in astonishment, when suddenly, without the protection of his helmet, he takes another shot between the eyes, killing him instantly.

While Wade treats a screaming Soldier, Corporal William Sampson sets off the bangalores, blowing through the barbed wire, and shingle. Miller and Horvath take Reiben, Mellish, Caparzo, Jackson and other Soldiers to a nearby defilade, while Wade tends to some wounded soldiers, with the help of a Senior Medical Officer.

Miller and his men are stopped by two MG42's, and two Mortars. He sends Caparzo, Reiben, and Mellish to "put some fire on that crew", while Davis, Debernardo, Young, and Valk try to flank them on one side. The first team fails to take them out, and Miller and Horvath send Short, Payton, McDonald, and Parkes to help. They are still unable to take the gun, forcing Miller to send Jackson to take cover in a small crater, and to "give him some fire discipline".

While he distracts their fire, Jackson takes a dash to the crater. There, he instantly kills one of the Machine gunners with a shot to the neck. He then shoots a small ammo compartment, blowing through the sandbags, and knocking the rest of the crew over, exposing them to Miller's men, who kill them. Miller then charges up the hill with his men.

On the way, Parkes is killed by a shot to the back, while the rest of the men take out the nearby emplacements. Miller then takes his group to a bunker. Horvath and Reiben throw grenades, taking out three soldiers, while Caparzo and Mellish shoot down three more. A flamethrower man named Doyle then sets the bunker alight.

Nearby, other Soldiers take out more German positions. One German is prompted to surrender, when he is suddenly shot in the chest by a trigger-happy American. The other nearby Germans surrender too, and unlike the other unfortunate soldier, aren't shot.

A group of Germans try escaping in a trench system, when the Americans catch up to them, and massacre them in their trenches. While Miller is giving orders on a working radio, he notices two Wehrmacht Soldiers surrendering. One of them, who happens to be Czech, tries telling a Corporal and another Soldier that he is Czech, when suddenly he and his companion are shot dead in cold blood by the Corporal. When the other soldier asks him what they said, the Corporal mockingly imitates, "'Look I washed for supper!'" Miller glares, and instantly walks off.

Nearby, Caparzo has found a Hitler Youth Knife, which he shows to Mellish. Mellish jokes that it's now a "Shabbat Challah cutter", when he suddenly breaks down. Horvath watches this in glum silence, while he scoops some dirt, and puts it in a can labeled "France", which he puts in a bag with other cans labeled "Africa", and "Italy".

Miller takes a long slow sip with his canteen. "That's quite a view," remarks Horvath.

"Yes it is. Quite a view," Miller replies, staring out at the view of the battle.

On the beach, the bodies of thousands of young Americans lie dead, either in the bloody water, or on the blasted beach. Among the dead is a soldier with a pack that reads, "Ryan S., brother of Private James Francis Ryan. 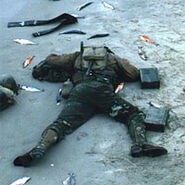 Medics work to save a man's life.

The radioman after getting his face torn and his radio equipment destroyed.

The soldiers storm the beach.

Miller moving up the beach surrounded by his dead comrades.

The soldiers land on the beach.

A group of medics desperately trying to save a soldiers life.

Wade using a dead body as a shield.

A soldier crying for his mother.

Horvath giving commands on the beach.

Miller looks in horror as a group of soldiers are incinerated upon landing on the beach.

A soldier retrieves his severed arm among the dead.

Community content is available under CC-BY-SA unless otherwise noted.
Advertisement