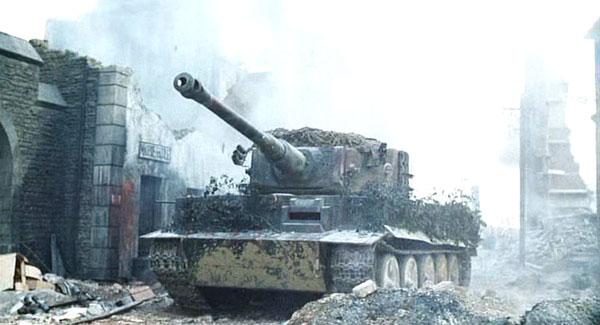 The Tiger tank was a Nazi German Tank, coming in two types, the Tiger 1, and Tiger 2, or "King Tiger". Using an amazing 88 millimeter gun, it was greatly feared by the Allies for it's manuverability, armor, and firepower, where most Allied Tanks couldn't even compare when it comes to those 3 categories, however with the exception of the venerable Russian T34 Tank which could out-source it, and with 50,000 Sherman Tank's used by the Allies it was also greatly outnumbered. It was introduced in September 1942, and the more powerful Tiger 2, or "King Tiger" was first intoduced in June 1944, during the Normandy Invasion. In the movie two Standard Tigers and one King Tiger were at the Battle of Ramelle, where one of the Tiger's shell had killed Private Daniel Jackson and Private Parker, and one had closed on the dying Captain John H. Miller, where he shot his Colt .45 Pistol at it lying against a brick wall, but was destroyed by a P-51 Mustang to end the battle.

Retrieved from "https://savingprivateryan.fandom.com/wiki/Tiger_Tank?oldid=4340"
Community content is available under CC-BY-SA unless otherwise noted.